A Duo of Hobblecreek Half Race Reports 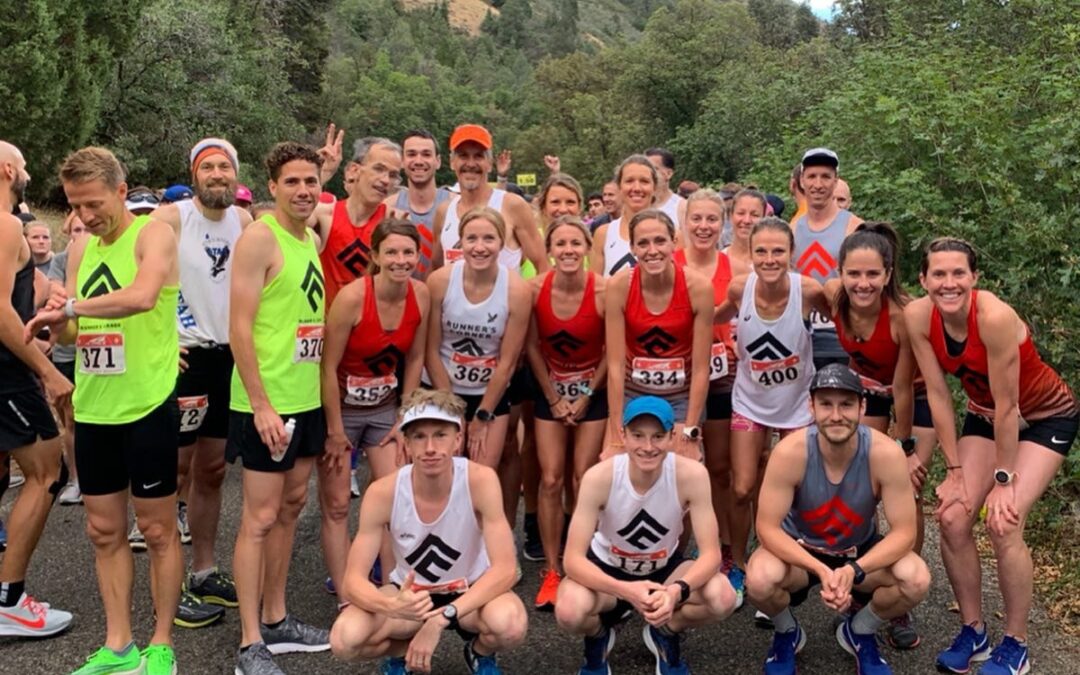 The Hobblecreek Half is a special race for me because it was my first canyon half marathon and my second half marathon ever. The first time I ran it was in 2013. I ran a 1:24:04. It was the year I was training to break 3 hours for the first time in the marathon. I was told that doubling my time in this half and adding 10 minutes would be about what I could do in the St. George marathon. So I told myself I had to run a 1:24 – which would result in a 2:58 marathon at St. George.

It’s been months and months of training and feeling like I haven’t been able to show what I’ve worked for in my training. I had a couple goals for the race- one of them was to be top three and the other was to PR. I knew I would have to work for both.

Since Dustin was racing too, we both arrived to the buses at 5:40 and jumped on. Earlier in the morning I had a gluten free and dairy free pumpkin waffle and then 20 minutes before I sipped on some Maurten 320. We hit the bathrooms right when we got off the bus. I warmed up for a mile, did my leg swings, and I was ready to go. I could feel it was going to be a good day. I had a decent taper and the weather was perfect.

There were a ton of the Runner’s Corner team there. It was fun to see all the girls. There were some very fast girls lining up at the start. I wasn’t sure how I would place, so I just told myself- it doesn’t matter at this point. Just run your race and shoot for a PR. That helped me relax a little bit.

The race started a little late. The timing system was late getting set up, but before we knew it, we were off. The first mile is very downhill compared to the rest of the race. I watched as several runners took off. I noticed I was 5th girl after the first quarter mile. I knew what pace I wanted to hit, so I didn’t worry and did my thing. I wanted a 5:40 first mile and I hit 5:42. This brought me up to the 4th place girl. I’ll call her Six-pack (she looked tough). We seemed to be wanting the same pace and it felt good to run with someone side by side. 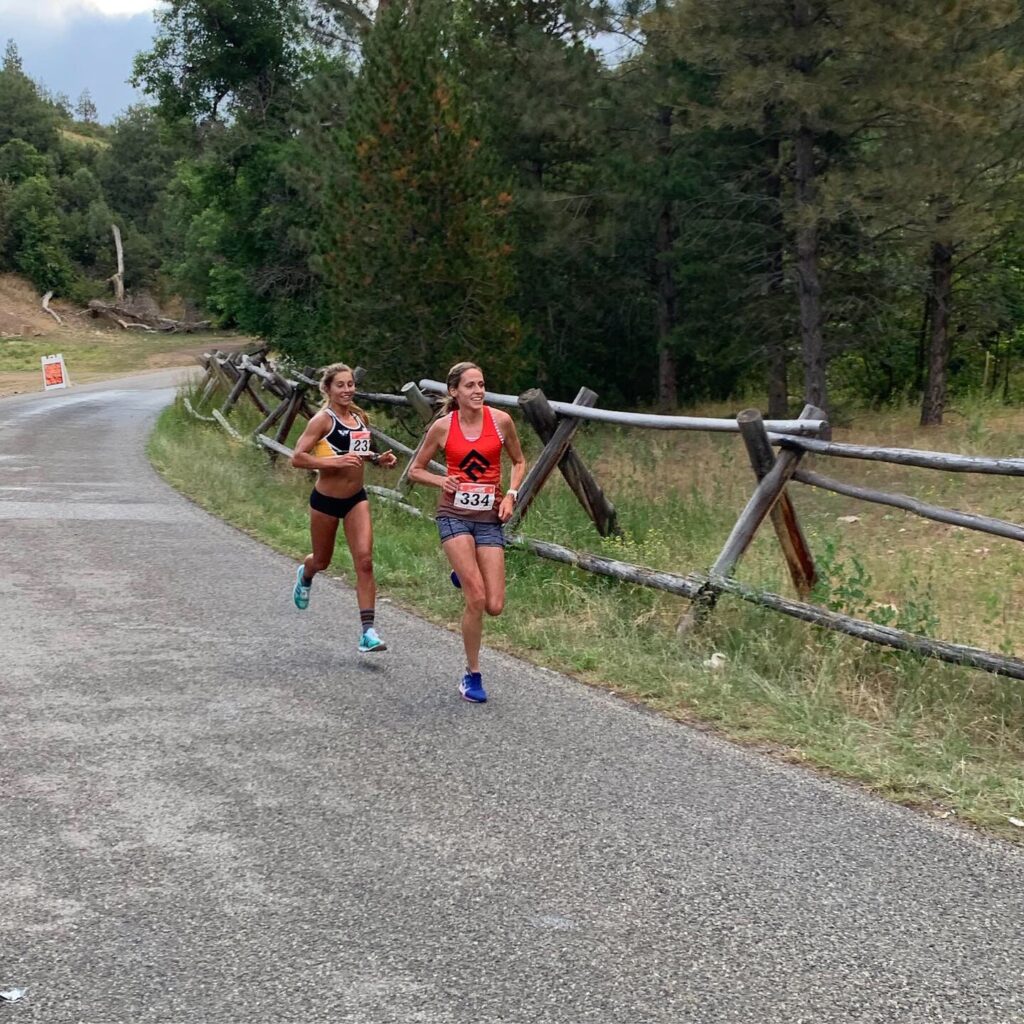 Shortly after 10k I remember to take my Maurten Gel. I also saw a water stop up ahead and I always really like to take it with a little sip. So I ate it as fast as I could just before the water and grabbed a sip. Then I took a run gum shortly after.

Mile 7 has a decent hill. I remember it being bigger and I was pleasantly surprised when it didn’t feel so bad. I knew it was a good day after I felt like that. My goal was 5:55 for this mile and I hit a 5:56. After climbing up the hill I had gapped Six-pack a little bit, but my breathing was pretty heavy. I eased off a bit to get my breathing relaxed again, and soon she was back with me. We could see the next girl up ahead. We were closing in, but not by much. It was still a big gap.

When we hit mile 8 and Six-pack made a decisive move. It was strong and obvious. She was ready to go. I knew I wasn’t ready yet- so I let her go. She didn’t get much farther in front of me as we headed into the rolling part of the course. It winds and rolls up and down. It’s beautiful and hard to see where the other runners are around you. I expected her to gap me more, but by the end of mile 9 she came back to me. (5:51 and 5:54 for 8 and 9). It’s like her energy had run out because when she came back to me, she just fell behind. She never came back. (I heard she was sick at mile 11). 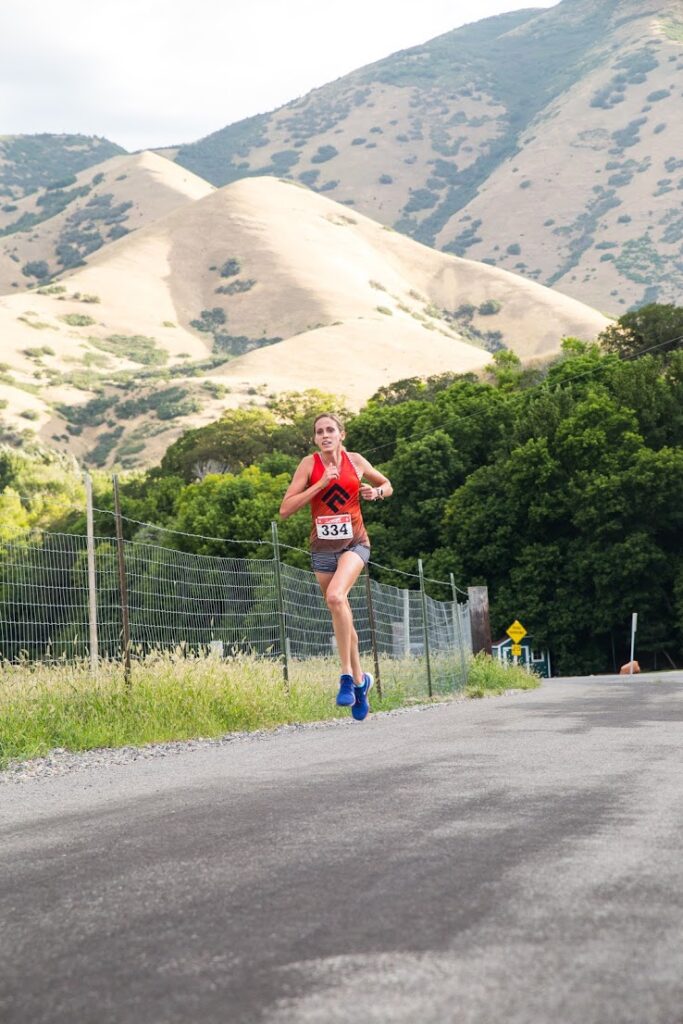 So then it was just me and then I could see Amber and Golden up ahead. They were looking solid, but I could feel them getting closer. Part of me was antsy to close the gap, but I kept telling myself – “don’t try to go to them, just let them come to you”. I stayed as relaxed as possible. I knew there was a nice big hill ahead and I needed to focus on that. Mile 10 and 11 were 5:52 and 5:54. I was surprised my splits weren’t slowing more with the rollers and less drop. It kept me fired up and I knew a PR was going to happen. I think I started doing math in my head with 4 miles to go, but it’s never that accurate when I’m running as hard as I can go.

Mile 12 (6:10) is a flat mile on an asphalt trail in the sun. It’s a mentally challenging mile as there is no aid and no scenery. Just before mile 12, I was just a couple meters behind the next girl. I dug deep and tried to really make this mile count. I wasn’t sure if she would go with me when I passed. I said good job and continued on. She didn’t seem to respond. I was now in third place with just over a mile to go. It hurt, but it also felt better than any half marathon I’ve run before. 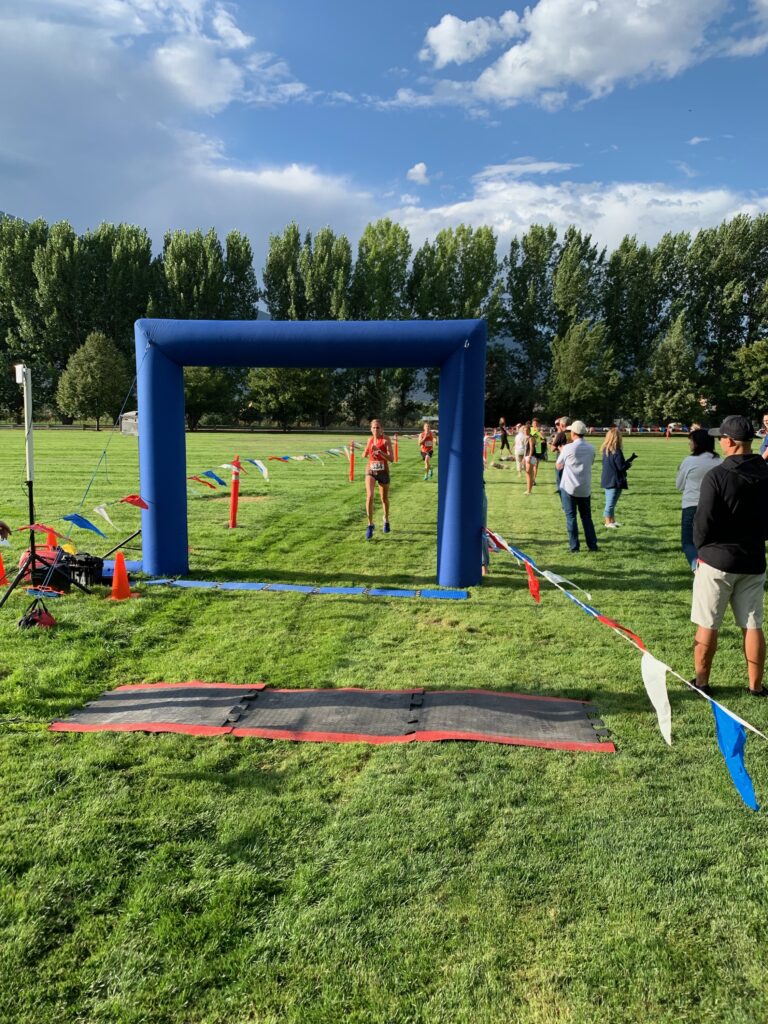 I must have given it more than I thought, because my legs buckled a little bit after I finished. So I sat on the grass for a second. My stomach held up great this time. No throwing up at the finish. I was so excited! Finally a good race! 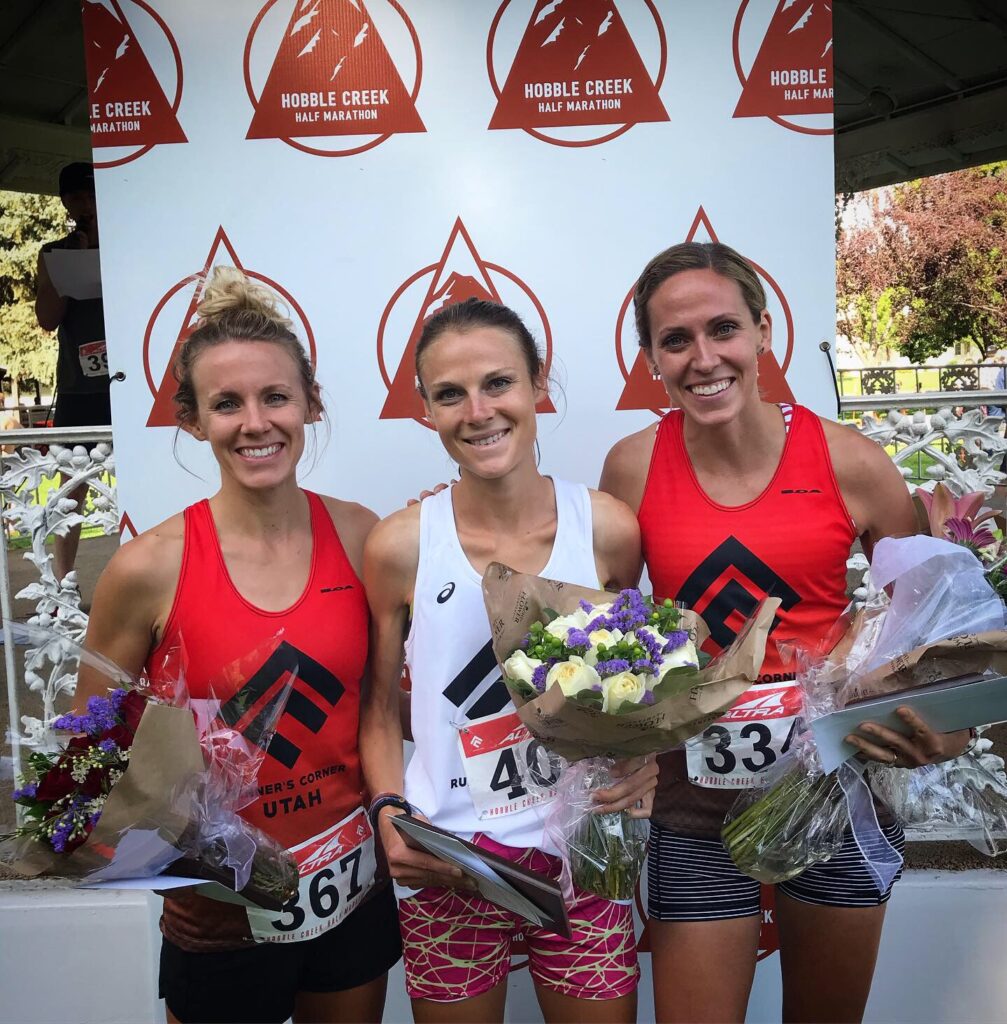 Jen had texted me the night before this race. She said just think – “Strong. Light. Free.” – well that became my race mantra. So when things got tough throughout the race, 6 or 7 times I used that phrase- Strong, Light, Free!

Probably my new favorite half marathon…Not sure if it is because it felt really good, or because I liked the course and the terrain, but I think it probably has something to do with both.

It was a nice morning. Temps were nice. We had a good downpour of rain while we were driving to the buses. Once we got up to the top, the temp was perfect! I threw the long sleeve on, but honestly didn’t really need it.
There were long lines at the bathrooms- so I grabbed some TP from the bus and took off into the woods when I heard a really deep voice yell, get out of the woods! 🙂 Usually I wouldn’t listen, but decided I would and just went for the bathroom line…
It was a lot of fun running into Golden at the start! That was a nice surprise. I didn’t know he was in town, let alone racing!  We chatted for quite a bit while waiting for the bathroom and while warming up. As we got the start, I did my typical scope out the competition. I realized I had two people to worry about.  A college dude that married Summer Harper and my own brother, Ryan. He is 7 years older than me, so pretty much an old man :), but nonetheless, he is in great shape…better shape than me, I’ll admit. 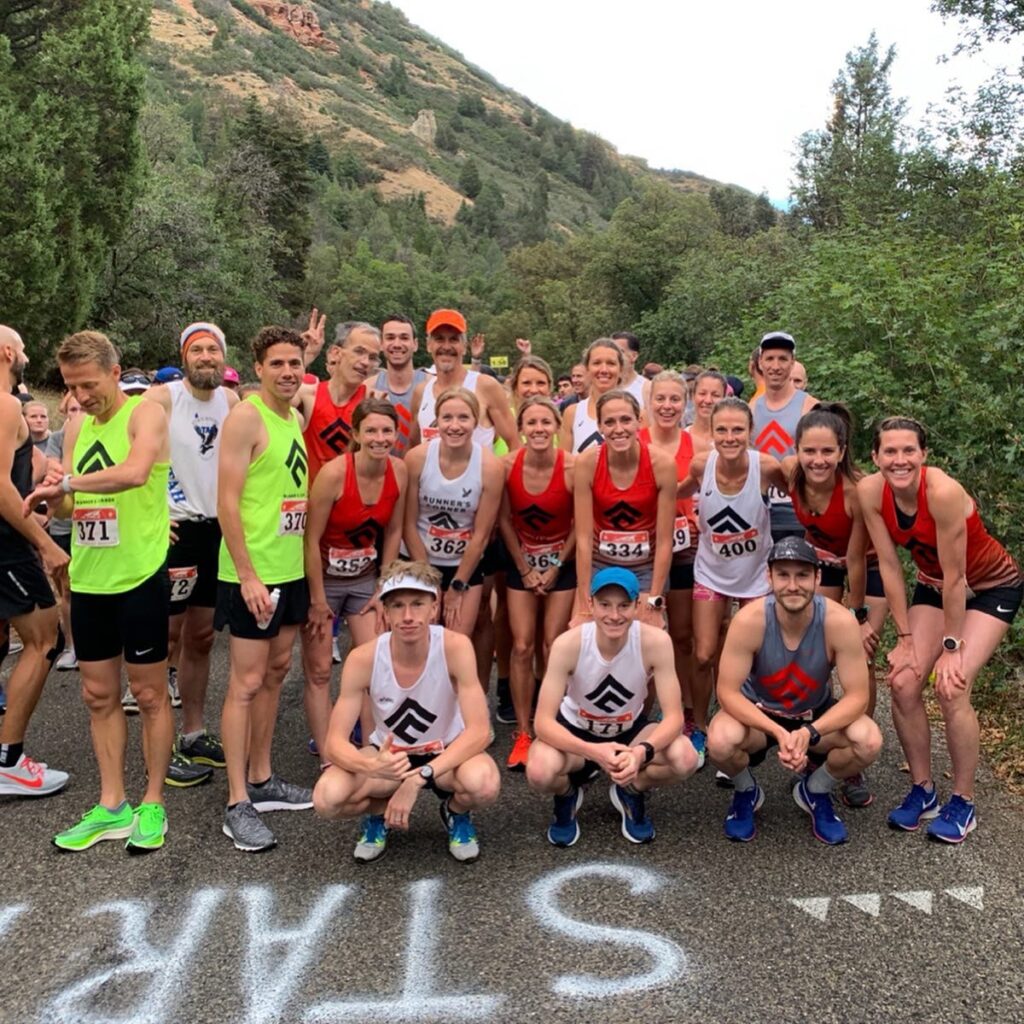 As the horn went off, A lead pack of about 15 took off. This included Amber Harper and Kodi on the female side and a whole group of guys. We chatted for about a mile and then people slowly started to fall off the pace. The number kept dropping until it was just Ryan and me (The one college guy up ahead and Dave Taylor).  We didn’t say anything to each other…We didn’t need to, we were both on the same page and were just cruising.  I was a little more direct on my tangents and we would separate on nearly every turn by 4-6 feet and then rejoin at the bend.
I can honestly say this is the most fun I have ever had in a half or full marathon. We were just clipping off miles until we came up on Dave Taylor and gave him a double fist bump as we passed. We also kept yo-yoing with Hawk and Brandon as they were checking up in the leaders and setting up cones.
Ryan and I were stride for stride through 9.8 miles. At mile 10, I new I was going to take my run gum and I also knew we had one last decent descent and then we would go over the bridge and up that biggest hill on the course. Ryan is traditionally a great hill runner and I knew I wanted to give it a little on the down hill and put a little gap on him knowing he would catch me on the hill.  I put the gap in and as we got to the hill, I tried hard to really relax and I could hear and feel him catching me…I wasn’t concerned, but kept controlled. He got within 3-5 meters of me as we crested the hill. I shook it off and said, 5K to go, I got this. I can make this happen today- I am feeling solid. 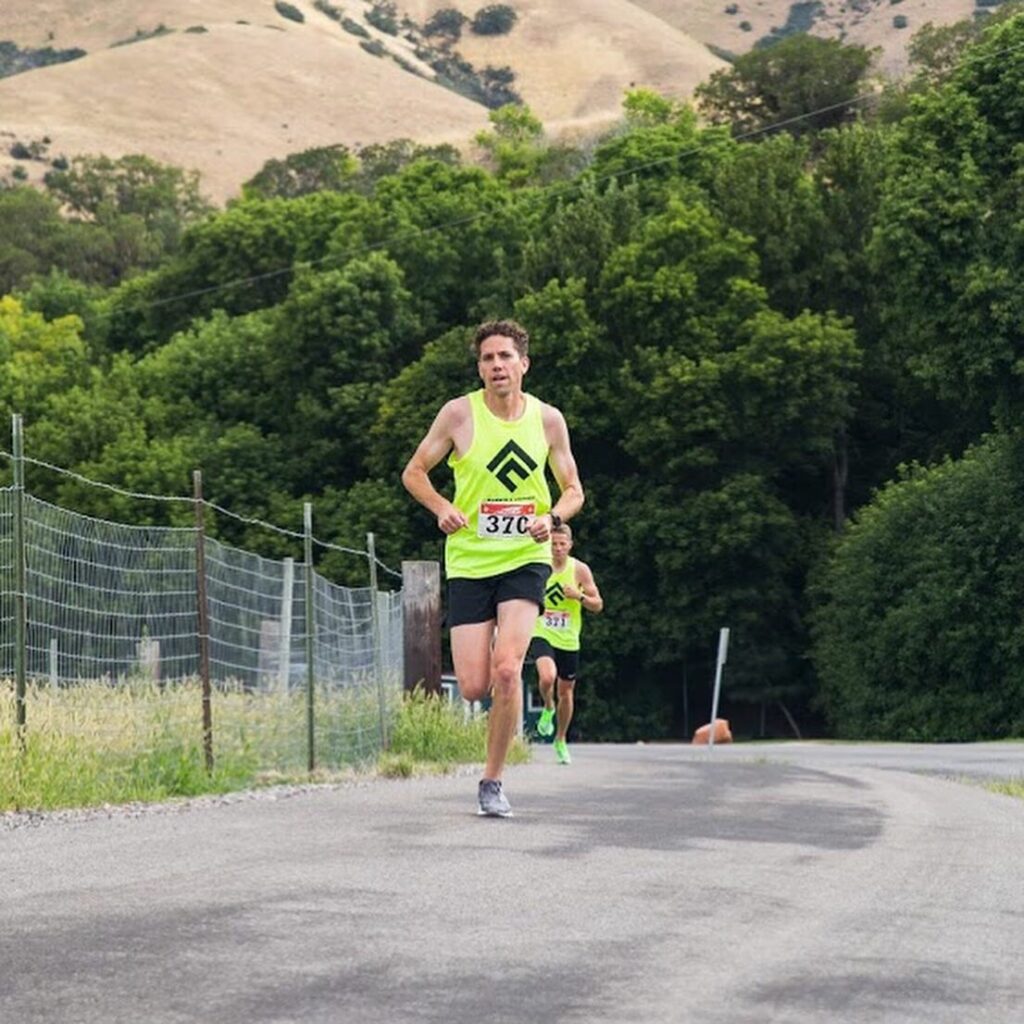 I made a distinct push to see where I could put this mile. I wanted to be in the teens. I honestly had the goal to run a faster last 5k than I had the previous week in the Alpine Days 5k that I had won. I worked for it and kept pushing. I knew mile 12 would be the hardest mile on the course as it was flat to slightly up hill. I made an effort to win that mile!
As I was making the turn into the last mile, I glanced back and saw Ryan. I had a decent lead on him, but wasn’t going to let up. I looked down at my watch and saw 5:10 pace. I said to myself- he is going to have to have one phenomenal last mile to catch me if I keep this pace. 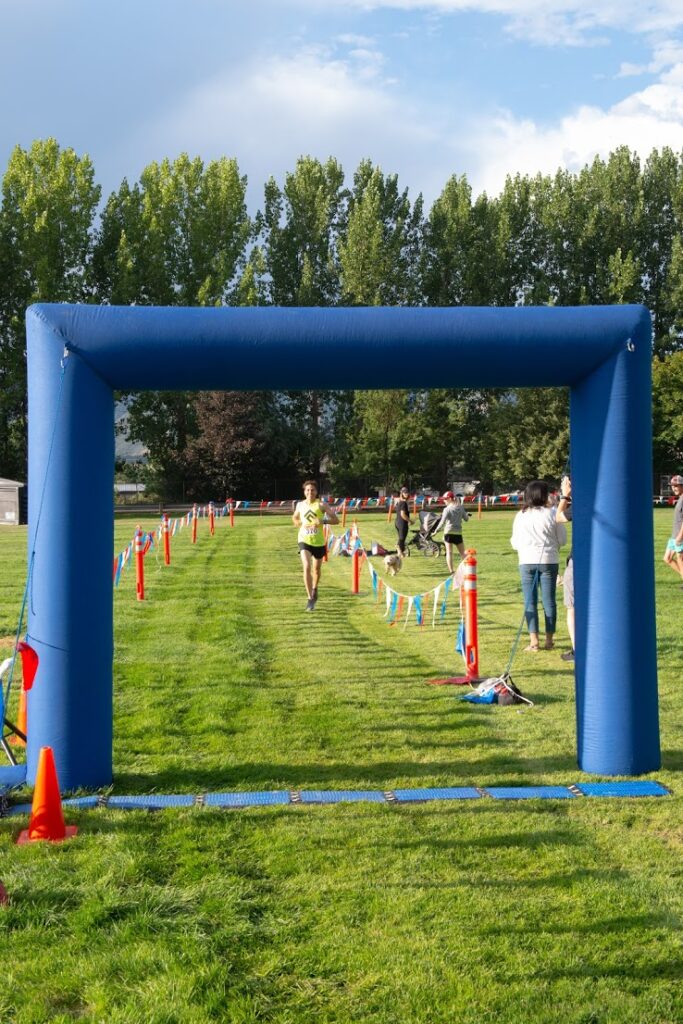 As the race was winding down and I turned onto the grass, I saw 1:09 on the clock and I was content, I hadn’t looked at the time on my watch once. I looked at the pace a lot, but never once the time.  I started to shut it down a little knowing that I was in the 1:09’s and it really didn’t matter if that was 1:09.30 or 1:09.58, it was still a 1:09!  I was happy with the finish….BUT, I learned a valuable lesson! The clock was off and I really ran an official time of 1:10.02! Talk about lame!  FINISH the Race Bybee! I tend to always shut it down in the last stretch if I know my place is secure. Wrong thing to do and something I certainly need to work on in races in the future!