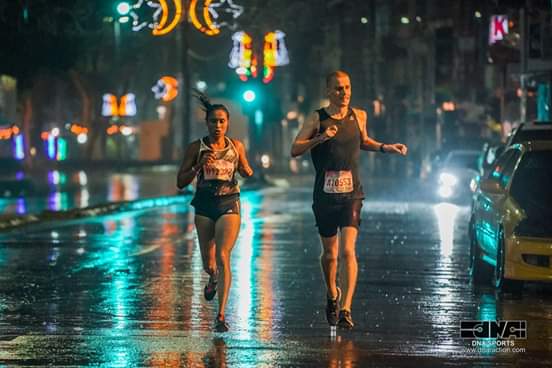 Imagine, if you will, an alternative world—a world so hot and humid that even mosquitoes, plagiarists, and Alf Menzies can’t exist. Now, come with me, and I’ll take you to the edge of y(our) world—to a place where Irishmen can’t exist, except for, sums supremo, Mark Steacy.

Irishman and math(s) teacher, Mark Steacy toes the line of the Cat City Marathon. Even though it’s a tickle after midnight, the temperature’s 35°C (95°F) and the humidity’s up around 88%. In the moonlight, glistening blebs of sweat adorn the furrowed brow of our legend-in-the-making, like diamonds in Cinderalla’s tiara. (Who writes this guffery?)

Rather than bore you with my overwriting and exaggeration, here’s a clinical recap from Himself:

‘Major stomach issues in the last half and felt very flat – felt like the body wasn’t 100% after the virus last weekend. Took the lead after 19km but the wheels came off soon after as I struggled to get anything into the body as the stomach rebelled. No knee or structural issues which are fantastic and an 8 minute PR. So a solid 19-mile tempo with a 7 mile cool down.’

Now, live dangerously, come with me and jump in my time machine called, The Willing Suspension Of Disbelief (apologies to the now, long dead, Samuel Taylor Coleridge)…

And here we are—seven weeks later—it’s,12:58 AM on Sunday, August 18, 2019. Our hero, Mark, is on the start line of the Kuching Marathon. Again, even though it’s around the time Prince Charming spent hours scrabbling about for a pair of Nike Disney Vaporfly—One Size Fits All—the temperature’s, 29°C (84 °F) and the Humidity’s a chafer’s nightmare: 83%.

Again, I’ll hand you over to Himself…

Now, I know what you’re thinking: he’s trying to squeeze the life out of this, like one of the fat ugly sisters, trying to squeeze a corpulent foot into Cinderella’s glass slipper. But stay with me, there’s an ironical, happy ending…

Reader[s] (apologies to the now long dead, Charlotte Bronte) I didn’t marry him, but he did get a Disneyesque, 20 minute PR.

Executive summary: In the space of seven weeks—in Zeus’ forsaken land of the running dead—Mark Steacy chopped a whopping 29 minutes off his marathon PR—he reduced his PR from, 3hrs 43’ down to 3hrs14’. Some feat.

Hours before Mark obliterated his marathon PR, on the other side of the world—in the real Disneyland (USA), where dreams really do come true—several of my runners were in action, making their dreams come true, some wearing the shoes Prince Charming spent hours trying to find. And there was one foot in particular that delivered an incredible feat—without the special, Disney make-believe slipper…

You’re all familiar with Kraig the yoof Packer (55) and his sensational string of PRs this year over the marathon and the half marathon; well, Kraig turned up to the Hobble Creek Half on Saturday and delivered another gobsmacking performance.

The feat to end all feet.

And while the PRs came tumbling down, like raindrops in Kuching, the real Disney couple—Dustin Prince Charming Bybee and Tawny Cinders Bybee— took podium spots, with Tawny running an outstanding 76’38” to take the third spot and a 2 minute 30 second PR.

Dustin took second, in 70’01”. (Dustin’s coming back from being out with a long term injury and is making great progress.)

Tawny and Dustin will bang out race reports, so I won’t steal their ‘thunder’.

And then, in the Run Elevated Half Marathon, we also had another fantastic performance from, Curtis Morley. Curtis ran a huge 4 minute  PR (94’18”).

Finally, and by no means a lesser feat, we had Eric Nelson running in the world-famous, Leadville 100 miler. But we’ll save King Eric’s day for a separate race report…