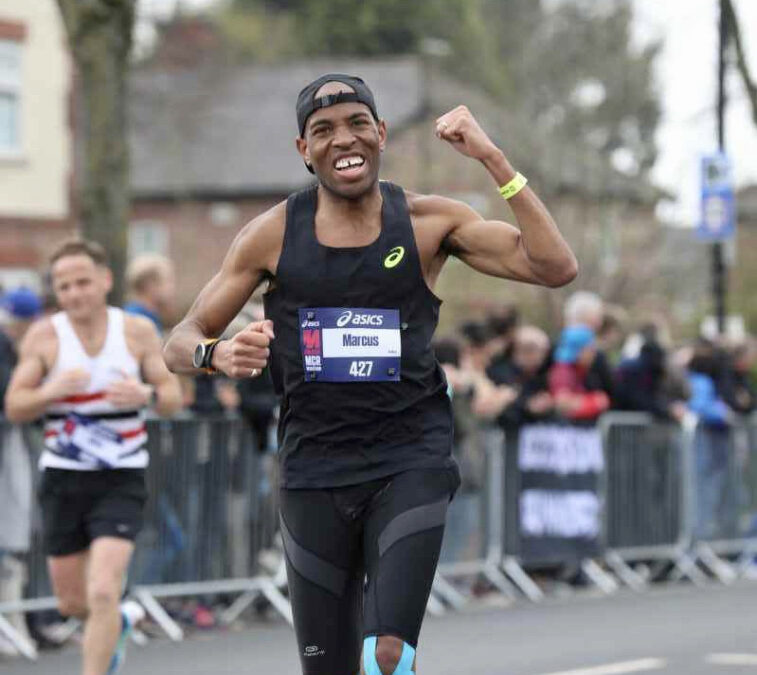 My goal was a sub 3 hour marathon. I finished the Manchester Marathon with a PB 3:05:58 and a Boston Marathon qualifying time (BQ).

Whilst I didn’t hit my sub 3 goal, ultimately in moments like this, I remember I started as a 4:55 marathoner, and have cut down 1 hour 49 minutes.

Coupled with the fact I work full-time and am a new parent, this has made training difficult. Knowing where I started, it’s hard to be disappointed with the result for too long.

Pre race:
In the race buildup my training blocks went well and I felt in good shape when I hit a 1:21 half marathon PB in training.

When things seem to be going well, life has a way of throwing in challenges to test how much do you want to achieve your goal.

The marathon week, I got knocked sideways by various ailments which meant I was off sick and needed antibiotics;I had an issue with my knee which required a physio visit to RD physio; the dinner I had pre race at an unnamed Italian restaurant, didn’t agree with me. Several times, post meal, I brought up my dinner and the carbs I took in beforehand throughout the day. I was low on energy, I was trying to take on fluids to clear it out of my system, and stay hydrated.

I must caveat this, to say if you’re sick pre race, it’s not smart to run. Don’t run. There is another race where you can run at your best. Please don’t follow what I did.

The race:
It was overcast and about 10°C which is absolutely perfect race conditions.

Due to the issues of the week, my coach advised against me going too fast. My plan was to stick with the 3 hour pacer, and later in the race make a dash for the finish.

I was feeling ok, my knee was holding up, I was sticking with the sub 3 hour pacer. I was thinking that today could be my day.

During this training block I experimented with taking one Maurten 100 gel every 20 minutes, and had this dialed-in during my training runs.

At mile 20 and I felt that knot in your stomach when you’re about to be sick. I gagged but nothing came out, so I dropped my pace so I didn’t vomit. And I could see the 3 hour pacer group pull off into the distance.

Whilst running I had to compartmentalize any feeling of disappointment about this until I crossed the finish line, as the race wasn’t over. I immediately thought whilst I can’t run at my target pace, I can still get a BQ and that became my target.

I also thought about the hours of training I had done, the tough runs that broke me down to make me stronger. I thought of the sacrifices I’ve made to run. The events I’ve missed, the family occasions missed. There were so many whys that I was reminded of, that quitting wasn’t an option.

Close to the home straight I saw my mate Stuart, at that moment I was stuck in a safety setting mode of running within myself, trying not to be sick and he gave me a great pep talk, as I turned the corner. He said what I needed to hear, and it reminded me of my true running why.

For those moments it felt like I could bypass the feeling of not wanting to vomit, and I felt strong to kick in my legs. I got into my stride and started overtaking more people.

The finish line was in sight, and as I prepared for the last sprint kick, I felt that knot in my stomach slowly constrict which made me gag, nothing happened, as I shuffled forward with unorthodox running strides. The knot in my stomach got tighter and I threw up several times, all whilst trying not to get overtaken by the runners near me, I was trying to multitask badly.

The spectators at the finish line, like to see runners giving their all, and I like to think I delivered.

I was vomiting a yellow fluid which is bile, which suggests the clearing of an empty stomach due to food poisoning from the previous evening. I know this as my daughter had it months earlier.

Although I didn’t follow my own advice, if you’re sick don’t run as you put yourself at risk.

Post race:
The hours after the race, I didn’t really appreciate the finish time as I felt physically and mentally spent, I was still feeling the residual sickness from the previous evening. I couldn’t hold anything down for hours after the race, without it coming straight out, I was tired, hungry and thirsty.

In the discomfort, this will sound strange, but I was truly satisfied as I gave my best to earn two medals. The first is the physical one you hold and the second is the most important, it’s the internal one, which shines a light on the strength that you already had, but maybe never acknowledged.

Reflections:
In honesty, my marathon training is a selfish activity. Thanks to my wife and daughter for letting me do this, as without their support I couldn’t train to the extent that is required to run a 3:05 marathon on the day.

At times trying to fit training around family was hard, for example trying to do a double run on a Saturday turned into running 13 miles at 6am, so I would not impact the day too much. But running 13 miles is very tiring, and catches up with you juggling family duties. Sub 3 training isn’t something you fit in, it’s something your life has to fit around. Hence why I don’t think balance exists in so many aspects of busy life’s.

Now I will have a two week break, get some quality time with my family, and restart sub 3 training for the 2019 BMW Berlin Marathon.

I will continue this article series when I return to training, adding strengthening work content with my physio Rush.

Final thoughts:
Whilst the title of this blog mentions the sub hour 3 reference. The number isn’t the ultimate goal. It’s about seeing what I am capable of and what my best looks like.

Years ago I worked with a coach, after some tests based on my fitness at the time, he predicted (with his training) that I’d be was capable of running the following times:

I never really believed that was my limit. Often we take on board others expectations of what we are capable of. Even though I had no evidence at the time, this limit annoyed me, I wanted to exceed the expectations he set.

Thanks to my coach John, he helped me exceed the expectations of my old coach, to help me see what my best looks like.

So far with John’s training I’ve earned the following times:

This isn’t about proving people wrong, but proving yourself right.

Ok I’ll get off my soap box now. I learnt a few lessons in the Manchester Marathon cycle which I’ll take forward to my Berlin training. Whilst the Manchester race wasn’t my day, I know that sub 3 is possible. If I can run 3:05 on a bad day, then what’s possible on a good day…

“You can’t become a winner overnight, or even in a couple of years, it takes time. You will lose races and you will have to accept that, learn from it and believe that you’ll win the next one, knowing that you’ll probably lose that as well. All the time you have to keep believing that one day you will win.” Paula Radcliffe.