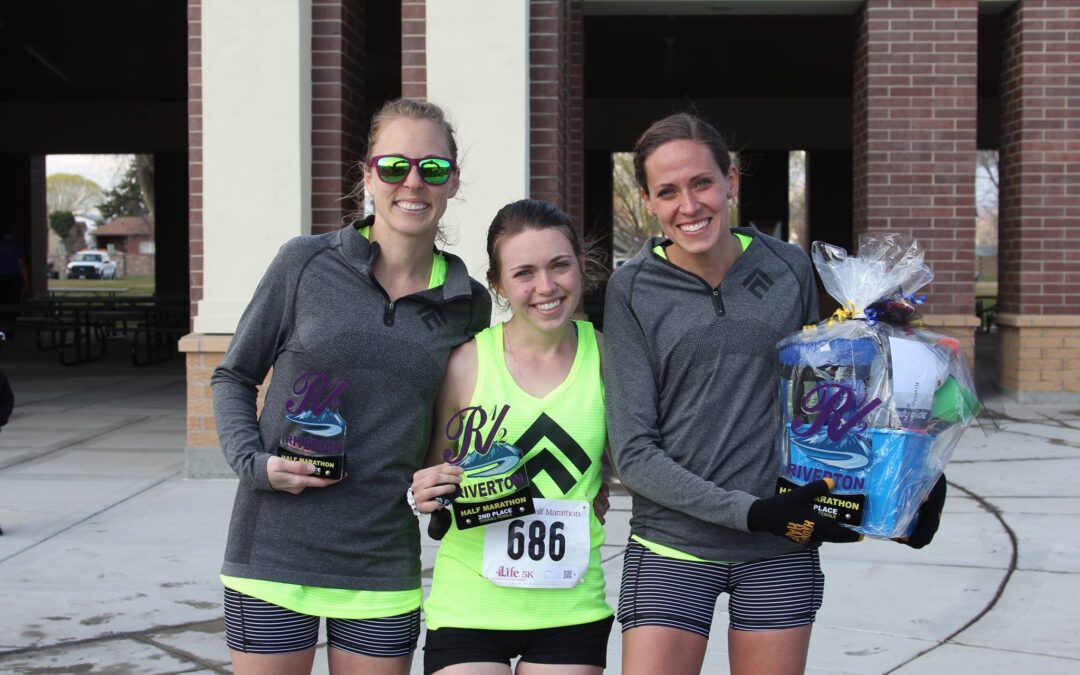 Here’s my Riverton Half Marathon race report. Enjoy! I signed up for the Riverton half because I heard it was along the Jordan River Parkway. I know that is a relatively flat trail and I thought it would be a nice simulator for my marathon training. After I signed up, I learned more about the course and found it wasn’t flat at all! I ran this race with two of my Runner’s Corner teammates. We are all training for the same marathon in June. 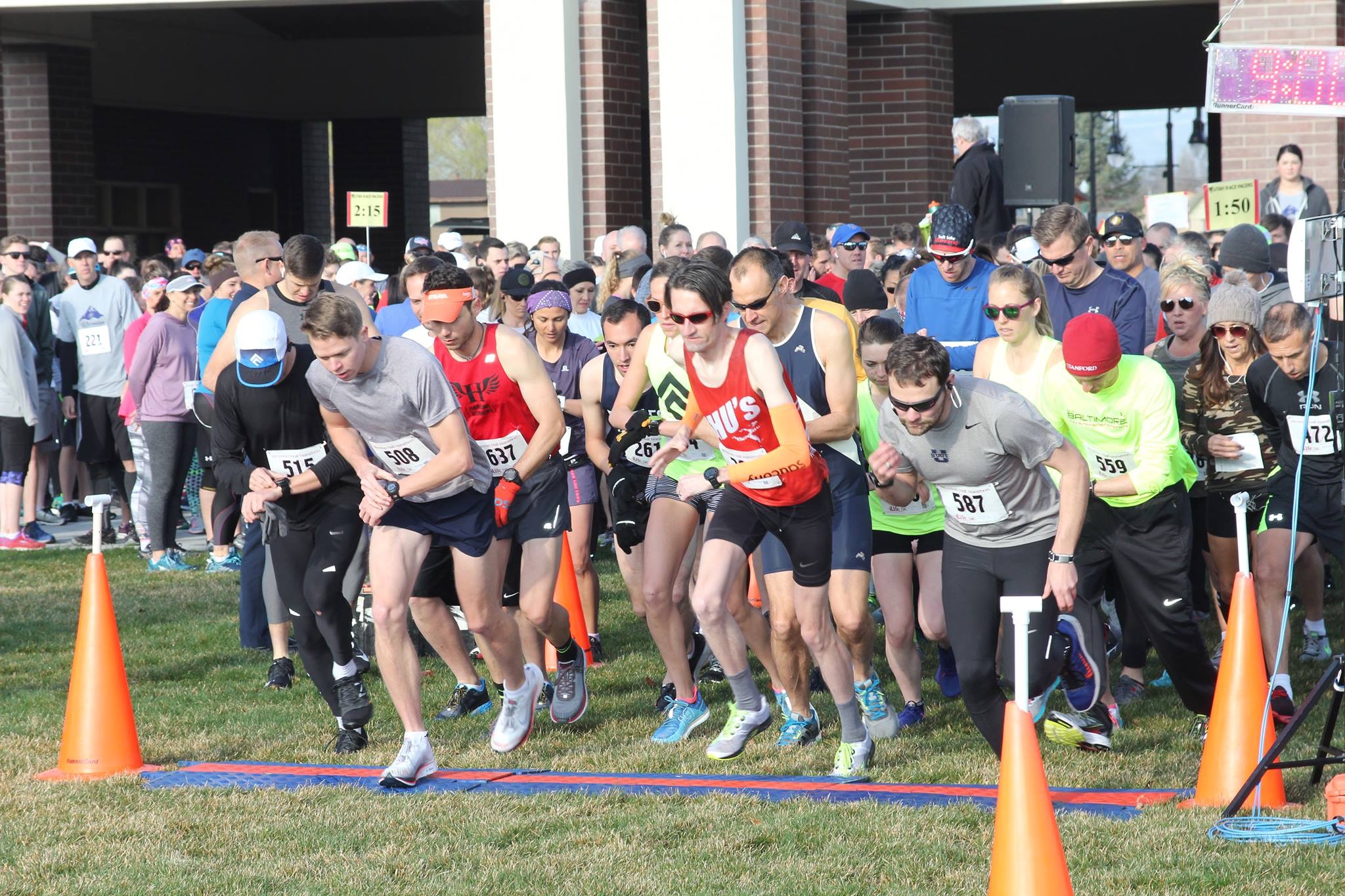 We started the race on a 100m stretch of grass in a park and then headed out onto the sidewalk and road. I immediately jumped into a pack of guys. I always run better in a pack and I really like someone else to think about pace. We made a bunch of twists and turns and went down a hill. I knew I was probably going out too fast, but with the downhill, I didn’t think about it much. When my watched beeped a 5:50 at mile 1- I panicked slightly, but oh well. We then went over a long bridge with boards that were covered in a nice sheet of frost and I almost fell several times. I had one bad slip and one of the guys in the pack reached out to grab me.

Mile two was nice and flat on the parkway. Kept it smooth and in control and ran another sub 6. Oops! By mile 3, the pack had broken up and I found myself running with a guy who was wearing a bright green top, the same color as my racing singlet. He ended up being a great help throughout the race. 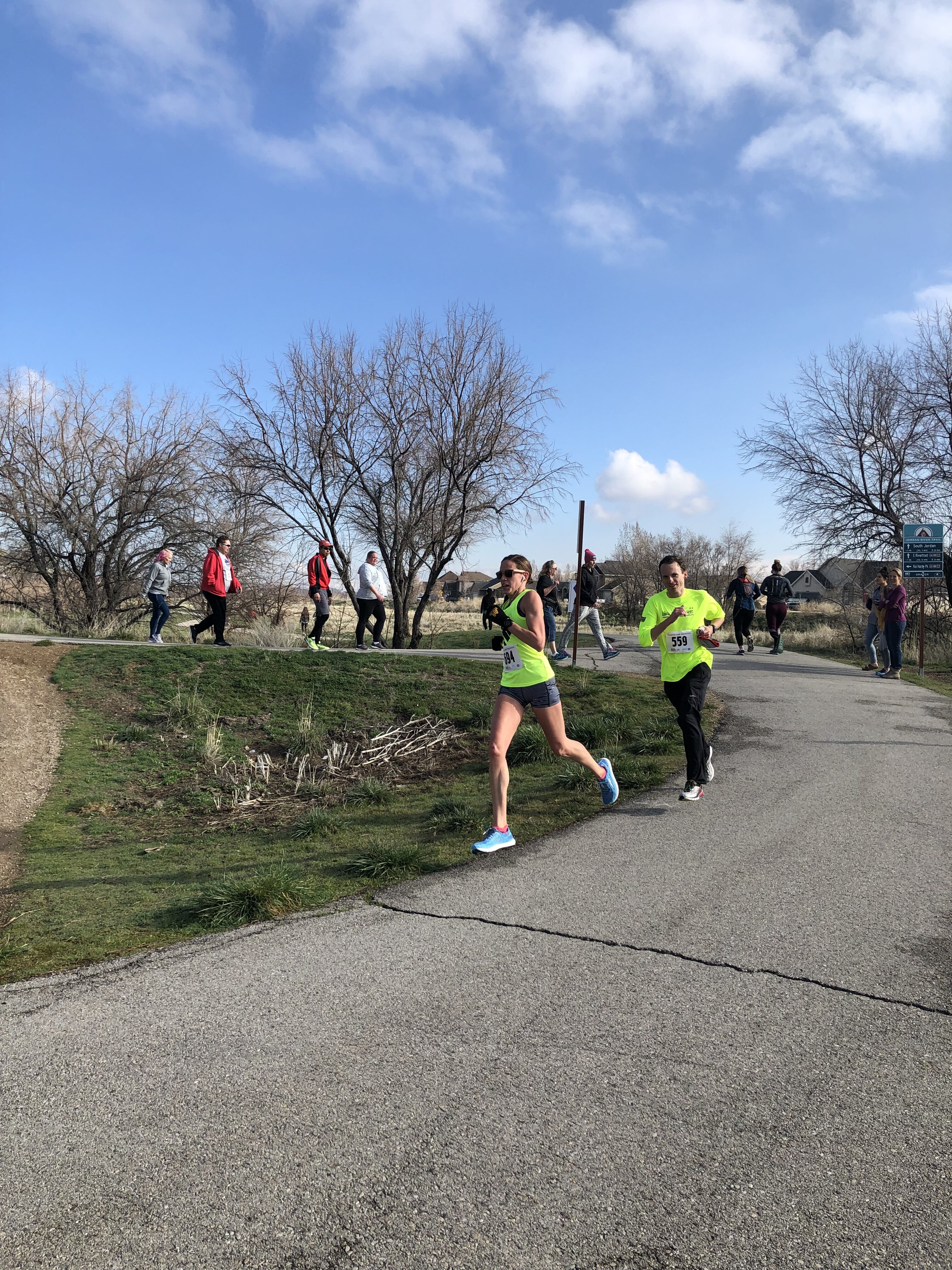 Studying the elevation on Strava, it looks like mile 3 is flat, but really it has a giant hill right in the middle that you climb up and right back down. I tried to keep a smooth pace up the hill and slow down as to not pull anything out of my legs. Green shirt guy would always drop back on the hills and then come back to me on the flat. I saw Dustin and the kids for the first time just after this mile and it was a huge pick me up. Love their little cheering faces. 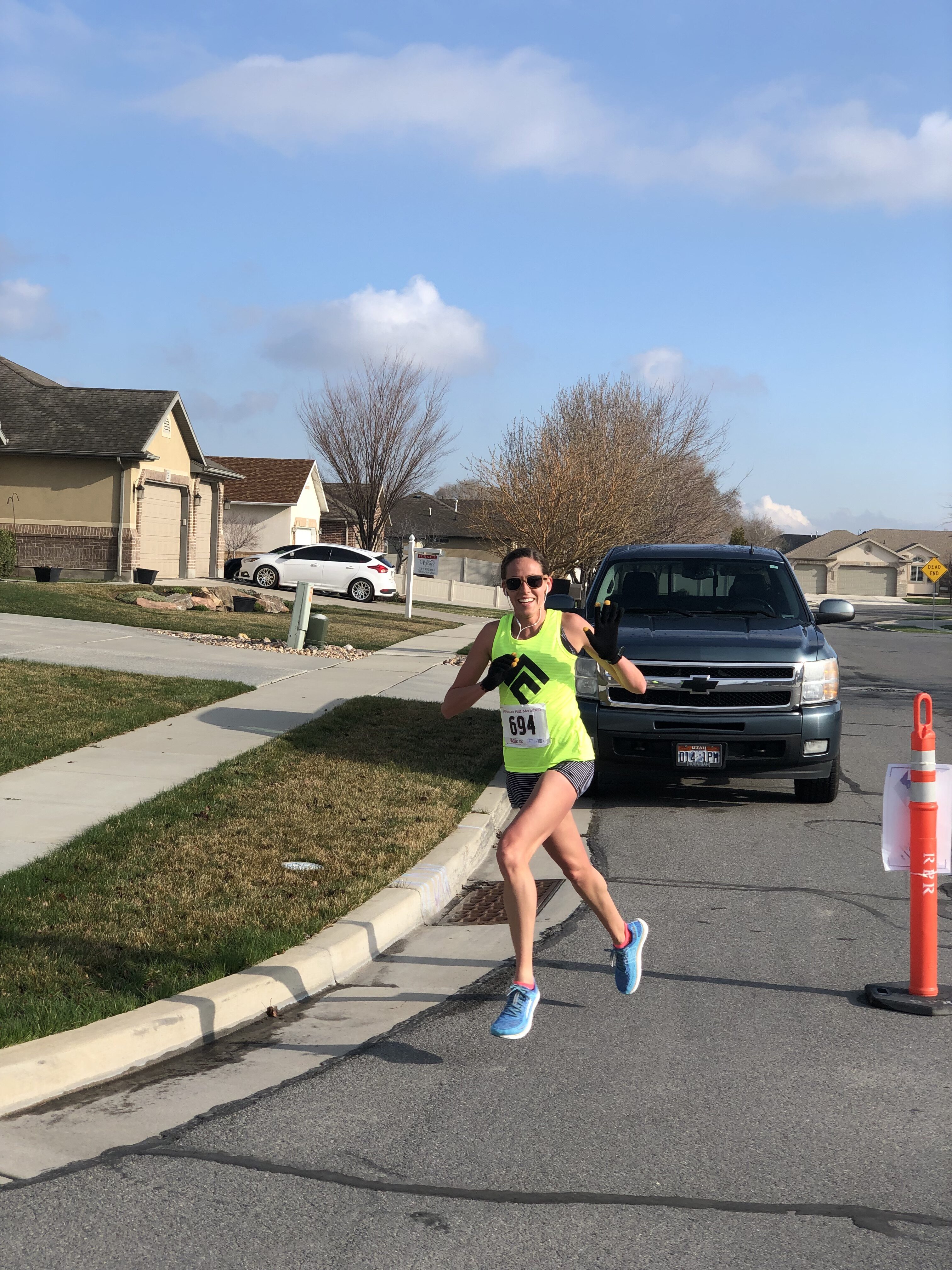 Mile 4 was beastly! We climbed up into a neighborhood and ran up a giant hill. It was very steep. I remember thinking- if i run a sub 6:30 on this mile I will be really happy. I ended up running just under 6:30, but my legs felt very fatigued for just hitting 4 miles. Luckily mile 5 was somewhat downhill and I felt my legs start to come back as we ran down a busy road and then into a neighborhood. I was just focusing on good form and running as relaxed as possible.

I saw Dustin and the kids again right at mile 5 and that was really nice! We got back onto the parkway at that point and the flat felt smooth, but at the same time I was already feeling those two big hills in my legs.

We ran into a bunch of traffic as our path intersected with the 5k that was happening at the same time. It was really crowded, and at one point I almost came to a complete stop trying to get through. It was a break mentally to be distracted by all the people, but I definitely felt my pace drop. We got through the group and the path cleared up again. It became the opposite, and it was lonely miles on the trail with no one in front. Just me and green shirt. 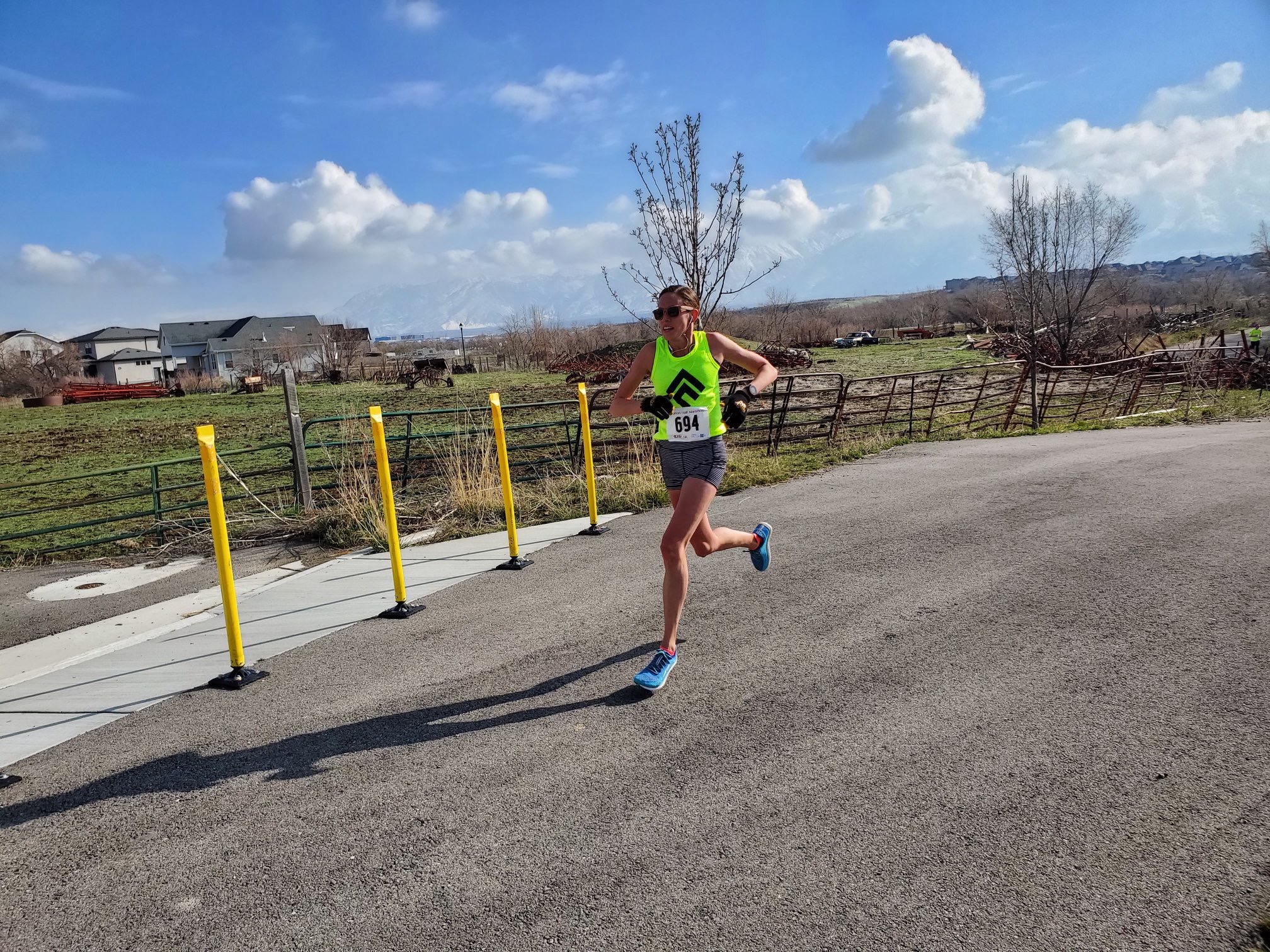 I planned on fueling right after mile 6. I had a small bottle of about 4 oz of Maurten 320 in my side pocket. He had started to fall back a bit when I began to fuel. I hate trying to fuel on the fly and I had to slow down to get the Maurten in. It always makes my breathing heavy and I choke a bit. I’ve got to figure out how to fuel better. Green shirt caught up to me and got a little ahead. As soon as I finished fueling, I caught back up to him and we worked together for the next mile.

Just after mile 7, I decided to take a run gum. I never use caffeine except for races. I pulled the piece of gum out of my left pocket and it slipped out of my hands and dropped on the trail. I stopped and ran back to grab it. Green shirt made a big gap on me at that point, but he was super encouraging and motioned me up several times – basically saying, “Come on! Come get me!” I dug in an caught him. That mile (8) ended up being slower than I wanted, but good considering my stop.

Legs are feeling decent and then I looked ahead and saw a giant climb – not quite as steep as the others, but definitely the longest. On strava this shows a -10 drop for mile 9, but in my mind, this one of the hardest miles. Big long climb and then a steep drop immediately afterwards. No long descent to even soak in the reward of the climb. Green shirt fell back after this climb and drop and he never came back to me, dropping further and further behind. Mile 10 was eerie as I winded through the trail. No houses or people or runners. Just me running. I wondered if I was even running the right way. Just a slow gradual climb at this point. 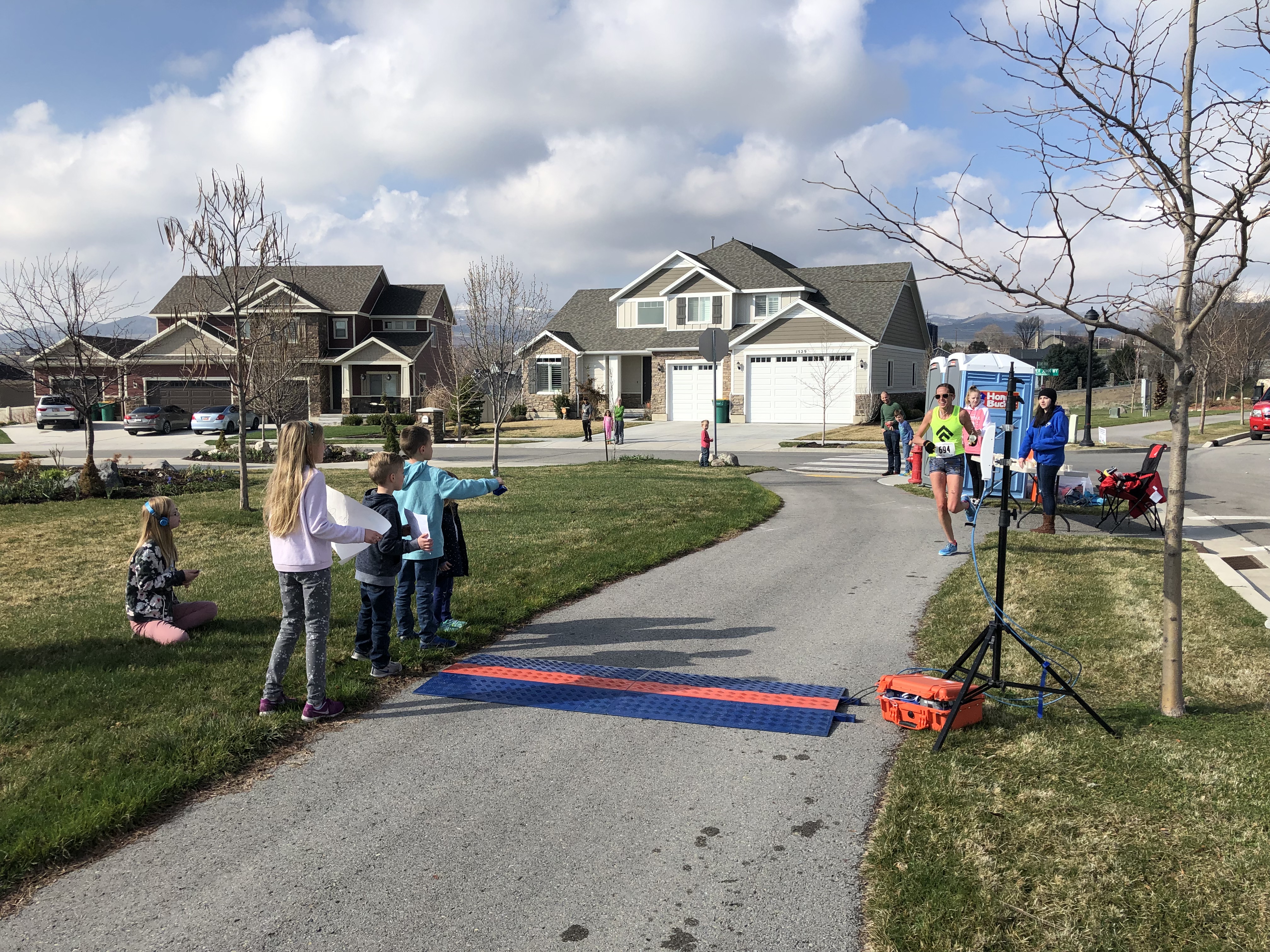 Mile 11 was rolling and climbing and winding through the neighborhoods. Dustin and the kids were cheering at this mile. When I started mile 12 I had the thought that maybe I was done with the hills. That it would be a nice run to the finish. It started with some down and then a very steep hill and a right turn onto a dirt road. Okay- maybe now I was done with the hills- nope- a big dip down and a climb back up. 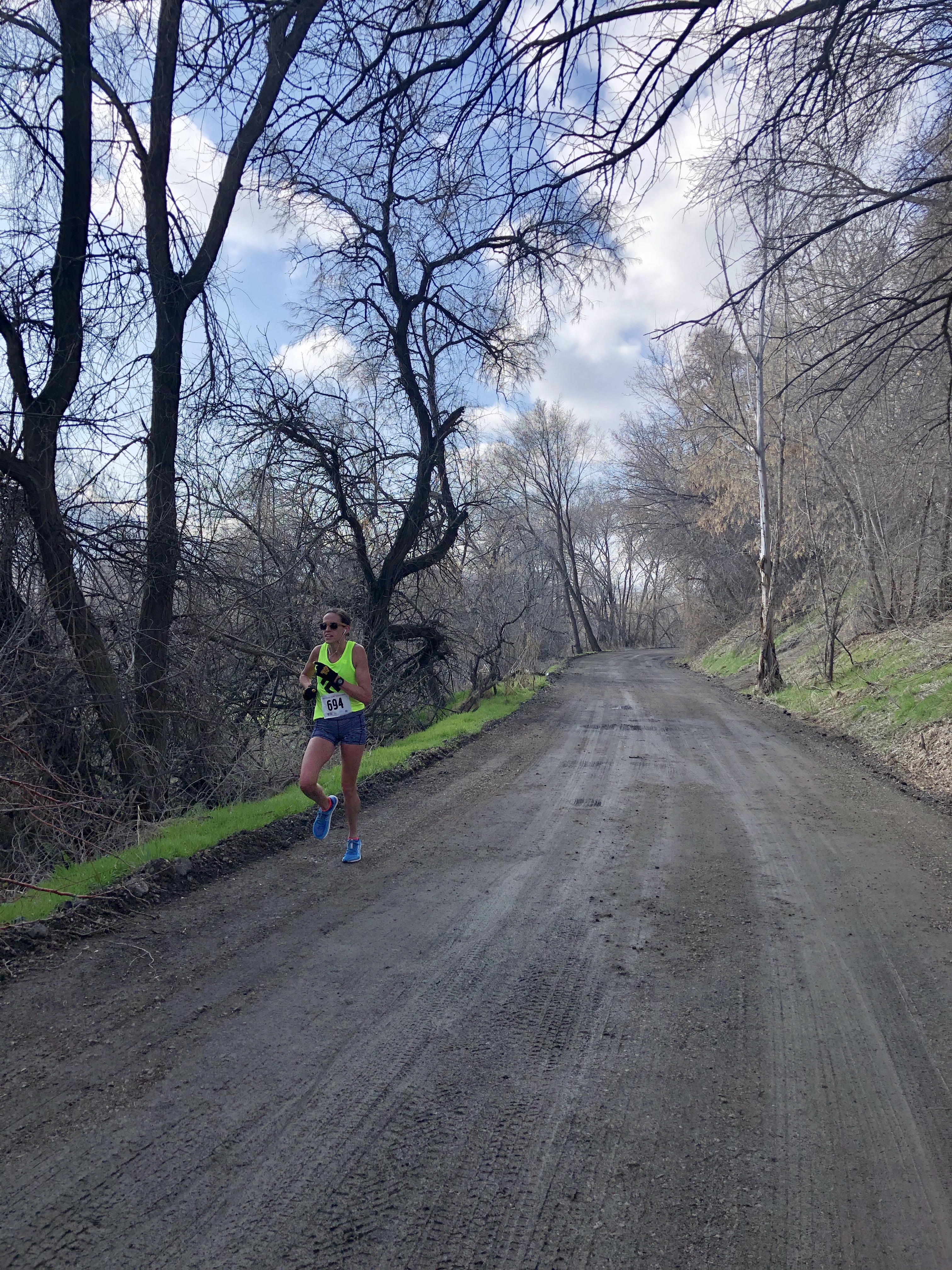 Dustin drove by me with less than a mile to go a cheered. I was hurting pretty bad at that point, but Dustin talked some sense into my legs and I was able to hold pace as we went down a straight road before the turn to the finish. The cop directed me across the road and the last 100m were the same stretch of grass that we began on. So happy to be done! First place female, new course record, and a 1:22:42. 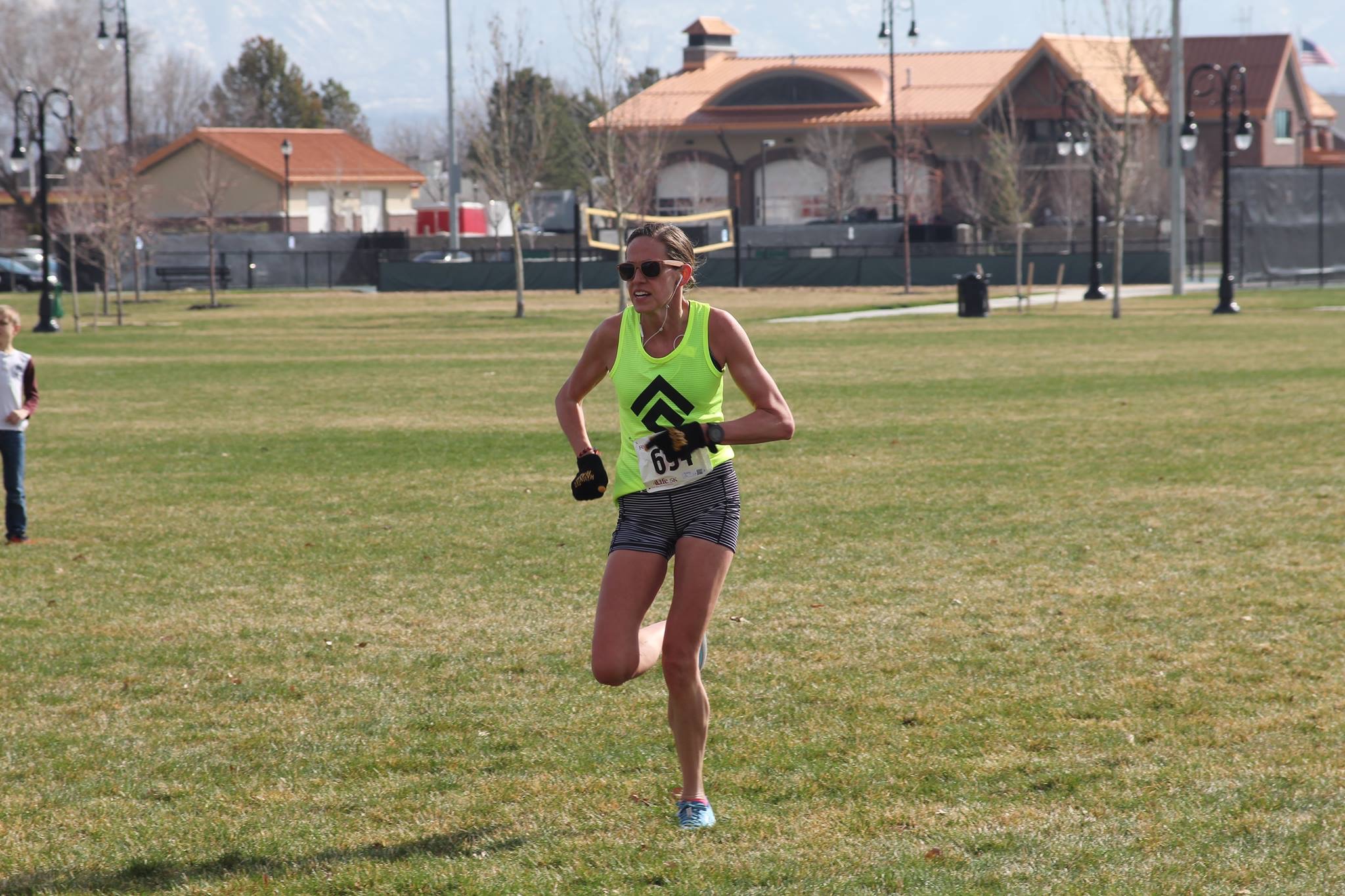 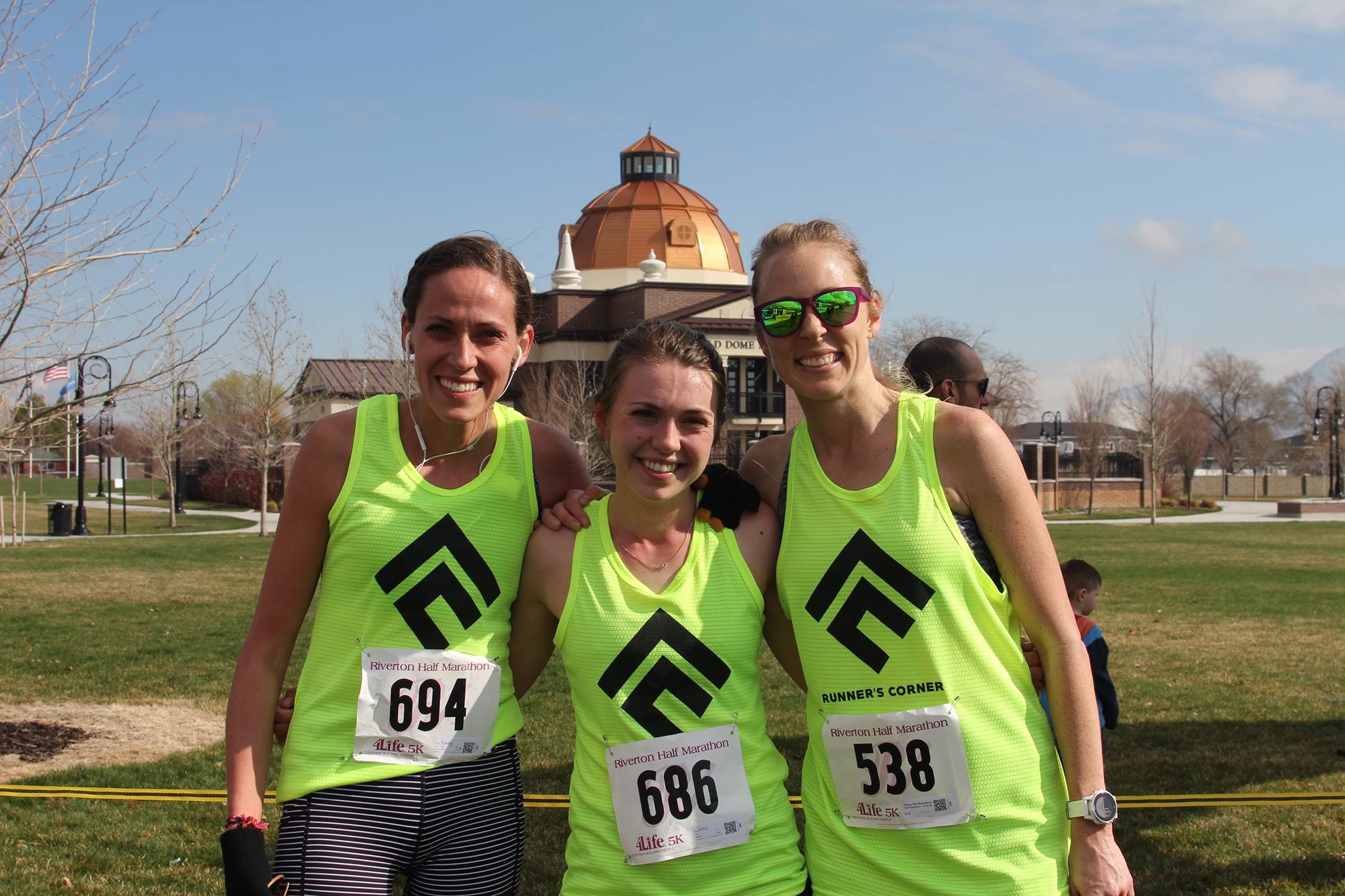 I expected a faster time, but reflecting back on the course, I feel like I dug deep and gave a solid effort on a difficult course.