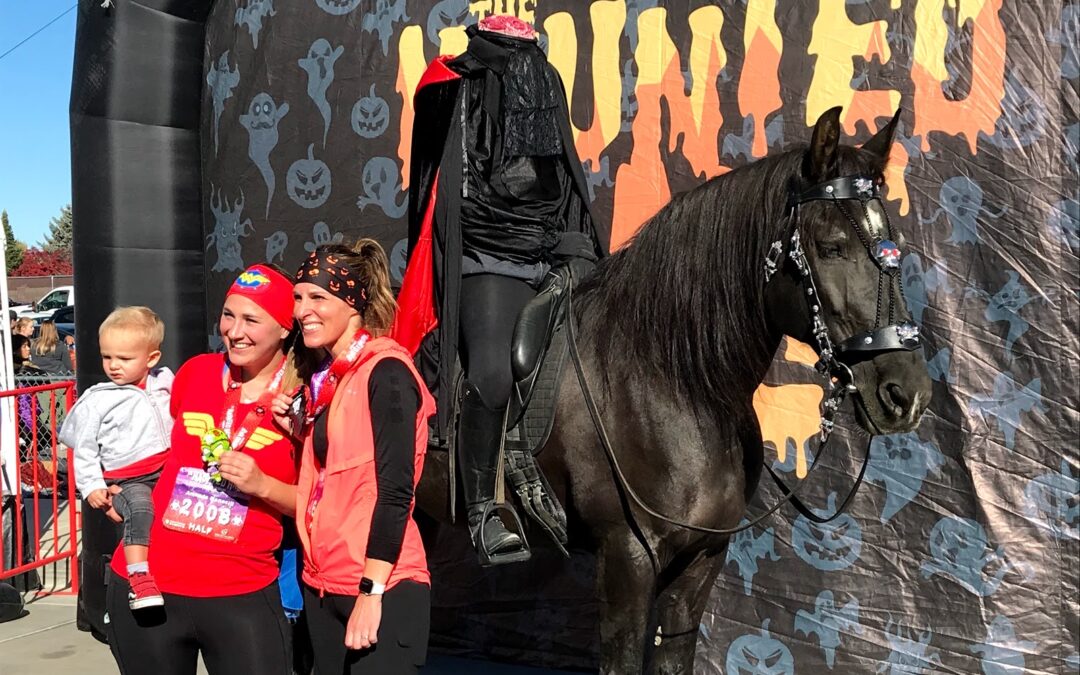 “Chafing the Dream!” Luckily this isn’t what I was doing- it was just the best sign I saw during this race.

I didn’t set any records, I didn’t place, I didn’t even PR- but for me this race was a big personal win. It’s only my second half marathon ever, and my first since having kids 4 years ago. I had made a goal this summer that I really wanted to run a half marathon and I had chosen the Hobble Creek Half since that was the first one I had done in 2014 and I enjoyed it. However, after I went to the ER with a pulmonary embolism a few weeks before the race, I wasn’t able to compete. I was discouraged because I had been training really well for that one and felt like I was in the best shape of my life. It was discouraging to have to rest for several weeks and try to take up training all over again. But I still wanted to hold to the goal of doing a half marathon this year so I chose the Haunted Half in Provo.

Half the battle for a Halloween race is knowing what to dress up as. I wanted to do something fun, especially since I knew my little kids would love it. I decided Wonder Woman was a perfect non-chafing, race friendly outfit.

My training wasn’t as consistent for this race- between signing up later than I would have liked, some minor injuries and sickness, I didn’t follow my training plan as well as I would have liked. But I was excited and ready to run on the morning of the race.

The race starts later than most at 8:30 am and I feel like this is a perfect start time. It allowed me to wake up and not feel rushed with my pre-race routine. I woke up about 5am, and took my time getting mentally prepared, using the restroom, and getting to the busses. I ate half a bagel with peanut butter and a banana about 6:30 am and took some energy jelly beans about 30 min before the start.

I met up with Jami Jackson (my sister-in-law and running all-star: she’s finished ultra-marathons and countless marathons including Boston and a 10 time finisher for St. George) who showed me some excellent tips and secrets for success with this half. We waited in the parking lot at University Mall until the last bus because we knew it would be warmer there than up in the canyon at the starting line. She also gave me some thermal heat packs to put on my lower back before the race and I kept them on for the first couple of miles.

Once we got off the bus at South Fork up Provo Canyon, we only had 30 min until start time and we hit the bathrooms right away. This race was very well organized with tons of bathrooms, space blankets, hot cocoa and fire pits for the runners. They even had a costume contest while everyone was waiting for the start (I believe Sir Launcelot the Brave from Monty Python and the Holy Grail won, followed closely by a sexy Bob Ross??).

I was nervous about how the weather might be this time of year, especially since this is a canyon half marathon but it couldn’t have been more perfect. It was a little chilly when we started but I had shed my gloves and long sleeve shirt by mile 6 when the sun came out and there were warmer temperatures.

Overall, I loved the course for this race except for some steep uphill the last couple of miles (I think it’s a little rude to have uphill at the end). It starts up Provo Canyon at South Fork campground, then meets up with the Provo Canyon trail at Vivienne Park. It then follows the trail in the canyon until you get to the Riverwoods business park in Provo, Utah. From there it goes up Center Street in Orem, cuts through some trails in the River Bottoms neighborhood, until you finish the last uphill on Carterville Road in Orem. After that you meet up with 800 S and finish on the north side of University Mall.

My goal was to run between 9:30 and 10 min miles for this race. I started a bit too quick as I tried to keep pace with Jami for the first couple miles, and then realized it was too hot of a pace for me to keep up. The course is mainly downhill from the start at South Fork until mile 3 at Vivienne park, but there are some decent hills that I wasn’t prepared for that early on. I started out with a 8:08 pace for the first mile, then 8:38 and 8:41 for the next 2 miles. Once we passed Vivienne Park and got on the Provo trail, I felt like I had started too hot and I tried to relax and averaged between 9:19-9:35 until mile 10. At mile 6 I remembered to take my GU at the aid station there with some water.

It was at mile 10 that I hit a mental wall and my lack of consistent training caught up with me. I stopped at each aid station to drink some water and Powerade and that was my mistake because once I stand still I find it hard mentally to get going and get in my groove again. By this point we were out of the canyon and I knew we had some uphill ahead that was mentally getting to me.

Between mile 10 and 11 there was a good stretch of uphill that I took really slow and then between mile 12 and 13 was the steepest hill where I alternated walking and running. I ran mile 12 in 11:56 and mile 13 in 12:05. I could tell that I had started too quick and was paying for it at the end. Finishing strong is really an area I want to work on in future races.

With .1 mi left to go I saw my husband and kids cheering me on and I started to tear up when I saw them. I sprinted the last hundred yards (maybe it was the spooky tunnel that gave me the boost) and finished just under 2:15. I could feel my legs giving out at the end from all the downhill, and even though it didn’t feel that steep most of the time, I was feeling the 1266 ft. elevation drop.

Overall I thought this race was great and I would definitely do it again. It has a light hearted atmosphere with most of the runners dressed up in costume, a beautiful course and perfect fall weather. It was also my first race done by Runtastic Events and I thought they did a great job of organizing it including bathrooms, aid stations, bag drop, and a fun after-party at the finish line. I’m thinking of dressing up as a soccer ball next year so that maybe I can convince my husband to chase me and run it with me.

Let me know your recommendations for a half-marathon in Utah for early next year!